Roll up, roll up.

Hello dear readers and a big hello and welcome to Stewart, my new follower. I hope you enjoy what I have to offer and long may you stay aboard.

This week I've still been a bit busy on my little projects, but first up, here's something you can do from the comfort of your own home, The Big Garden Birdwatch. All you have to do is register with the RSPB on the birdwatch link, then come this weekend of the 25th & 26th January, grab yourself a culpa and some biscuits and count how many and what birds visit your garden in 1 hour. It really is that simple and if you don't have a garden, then do it at your local park or nature reserve. Your participation in projects like these really are important and help us to understand what is happening in nature.


As you can see, he really does show a lot more interest this time, which is a good thing. Also good news is anymore video from the nest cam from today should include sound on it as I've figured out why there was no sound before. I put a plug in a wrong socket. But hey all sorted now and hopefully next time you'll get a full on surround sound experience, well not surround sound, but you know what I mean.

I decided to have a go at making the rain guard from the old perspex vanes of the MK1 moth trap. I even ordered the special 'perspex cutting' jigsaw blades that would glide through the perspex. As I said last week, cutting perspex isn't very easy, in fact, it's nigh impossible to do without cracking or breaking it. But hey, I now have 'perspex cutting' blades, so this should now be a doddle, wrong.

As you can see in the above photo, it chipped and split and flung sharp shards in all directions. So what am I going to do? Thankfully, my superstar wifey is a bit of an up and coming glass artist and as the collection vanes are already made out of glass, she reckons she can make me a specially designed rain guard. Excellent! The MK2 really is going to be an all bells and whistles moth trap.

In the meantime though, I've started to put some varnish on to the trap to help it be a bit better protected from the weather than the MK1.

It's only had a coat so far, but will look much better when that's done, I hope.

This project has hit a slight problem this week, none of which is my fault. I decided to order some plastazote (the foam used to pin collections to) from an entomologist supplier who I've used before. Dealing with this guy is a bit strange as he has no website. You have to email him to get him to send you a higldy-pigldy price list that states in bold letters at the top 'P&P WILL BE CHARGED AT COST', yet nowhere on the price list are there any P&P prices. The next line states that "Prices, in general are correct, but may fluctuate depending on wholesalers/suppliers demands'. In other words it might be the price stated, or it could be something completely different. Needless to say, I ordered some plastazote which arrived a few days later. It was well packed, rolled up in cardboard AND bubble wrap (weird considering it's foam, hardly going to break) AND plastic wrapping. After I eventually got through the layers of parcel tape I opened the rolls of plastazote and my heart sank, it was filthy. On one edge it had red and green paint or something running along it's edge. Then on one side of the foam it had filthy black water damage to it as if had been sitting under a dripping tap for some time. OK I thought, I could turn it over and trim off the edge, alas no, the other side was also as filthy running along its entire length.

I then opened the invoice inside to find that the plastazote wasn't £17.95 as I thought I was paying, but £19.10 instead, and although the postage label on the packet said £5.20, the charge for P&P on the invoice came in at £8.56. I know it was well packed, but the sum total of the stuff he packed it in would never come to £3.36. So as you can imagine, I wasn't happy and I had to do the thing I hate most, complain. When I spoke to him on the phone and told him it was damaged he asked in what way? I told him it looked like old water damage and his reply was "Yes, that's very possible, try wiping it down with a cloth or try sponging it out". I must admit, if this had been any other company, I would've told them right there and then what they could go and do with there suggestion. However, this guy comes across like a little old bloke who's been running his little business as a postal type of business that you would've seen advertised in the back of old entomology newsletters in the post war days. The internet bus of the modern world has passed him by and he forgot to put his hand out.

I tried to wipe the stains away, but it wasn't happening, so reluctantly I phoned him again. The conversation went a little like this.

Me: Hi, it's me again, unfortunately the stains won't come out
Him: Oh, can you phone back tomorrow?
Me: Sorry?
Him: Phone me back tomorrow
Me: Well I would like to get this sorted now please
Him: Well it's not convenient now, I'm just going out and I need to catch my bus (I hope it wasn't the internet bus).
Me: Well I'm sorry, but I need some plastazote.
Him: I'll call you back this evening.
Me: OK

He never called me back that evening. But he did call me back the following day where he really didn't know what could be done. So I told him I would send him the plastazote back and he could send me a cheque for the postage and that we would leave it at that.

This isn't the outcome I wanted and I have now ordered my goods from Watkins & Doncaster. They are slightly more expensive, but at least you know what the price is from the moment you order, you know you're going to get quality service and if there's a problem, they'll sort it immediately as I once received an item that'd been damaged in the post and they sent a replacement next day, no problems.

In the meantime, I added my collection of found dead bumblebees to one of the drawers I had already completed.

As I added them, I also took the opportunity to key them out and sex them too. This keying out was good as I could definitely confirm that they were Buff-tailed Bumblebees (Bombus terrestris). Out of the 1 queen and 14 workers, there were only 4 males.

Got a call from my dear old mother this week saying she had found a ladybird in her kitchen, what should she do? Like the butterflies I reported on a few days back, the ladybirds are also looking for somewhere nice and sheltered to sleep out the winter. In most cases, the ladybirds in question are Harlequins (Harmonia axyridis), the alien invaders. Even Chris Packham on BBC's Winterwatch said of his dilemma about whether he should kill them or not and last year I blogged on this topic about killing Harlequins when we found them. The outcome was, no matter how much we disliked it, Harlequin's are here to stay and killing them would be futile as they have much higher reproductive rate than our native ladybirds. Killing the odd one, two or even hundred here and there would do absolutely nothing to the Harlequin population.

However, I digress. The ladybird in question at my mothers turned out to be a 7-spot ladybird and I gave her (my mother, not the ladybird) the instruction to just place it in the shed. I popped round to see her the following day and in the process checked on the ladybird. I actually found two of the same species in the shed and duly sent a record of it to iRecord, something we should all do. 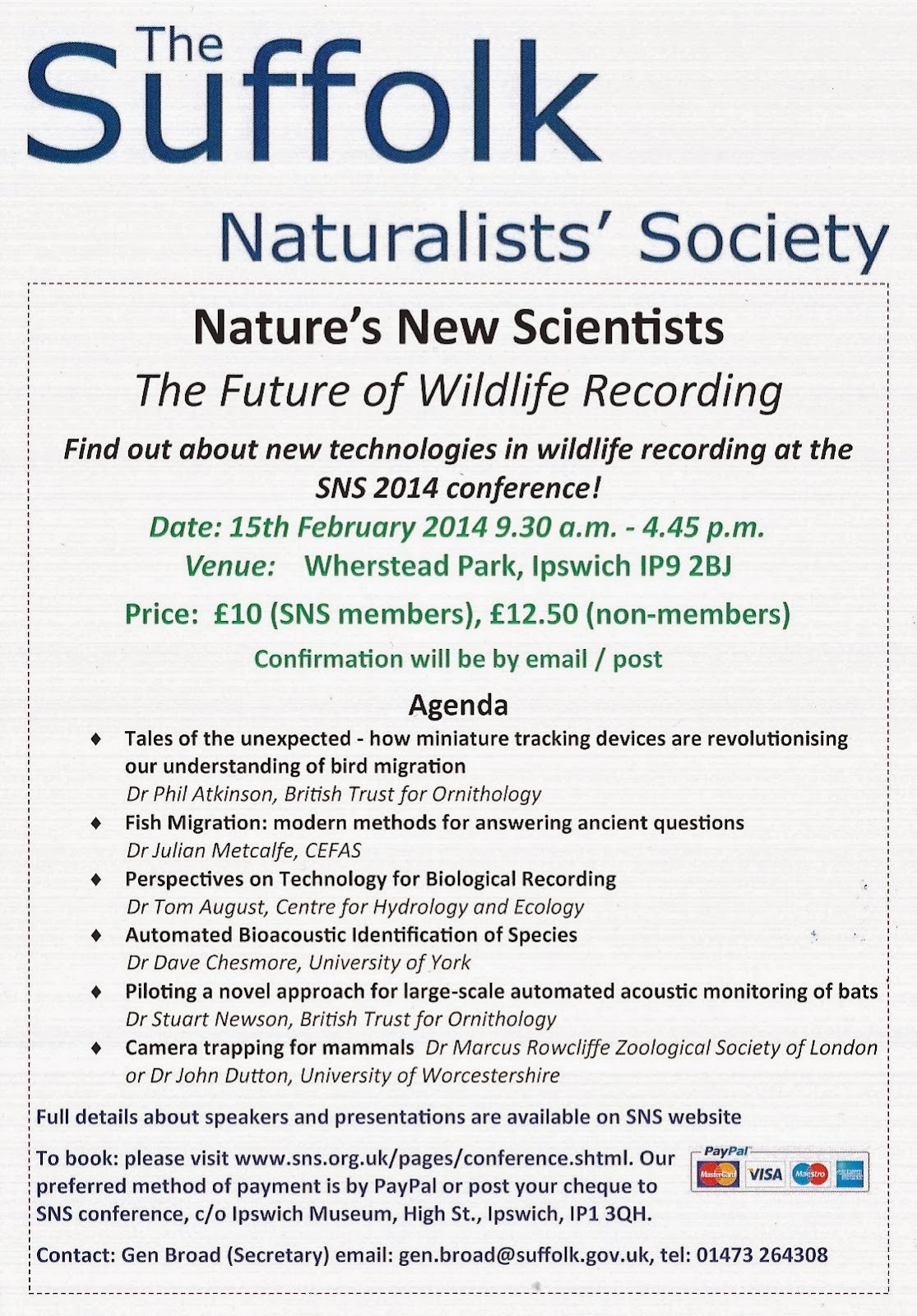 As you can see from the above flyer, the main gist of the conference is the Future of Wildlife Recording, a very important subject in these exciting days of technological wonders. Tickets are only £12.50 for non-members, which personally, I think is a bargain when you consider how much conference tickets are usually. I also have it on good authority, even though it doesn't say it in the flyer, that there will be some stands there such as Butterfly Conservation. If you want to know more about the conference, then go to the SNS website here where you can also book a ticket too.

I look forward to seeing you there.

Till next time dear friends, take care and be safe.