OK, I know it’s been a long while and I really do have a good excuse for it, honest. We (me and the Wifey) are currently in the process of moving house, so as you can imagine, I’ve been a bit rushed off my feet of late. Most of my office now sits in cardboard boxes, which is quite frustrating at times when you suddenly realise you need a certain book to ID a bug or work out a bat call, but can’t remember what box marked ‘BOOKS’ the actual book you need is in.

But fear not dear reader, I will still be a Suffolk Naturalist as I am remaining within this beautiful county, but am heading for grasses more rural. So hopefully, I’ll be able to give you an insight to even more nature than I currently do, fingers crossed.

Well, the last time we spoke, I had just got back from Latitude after doing my weekend stint helping kids go bug hunting. That was in July believe it or not, doesn’t time fly! Obviously I have been having far too much fun it would seem. As you can imagine, a lot has happened since then. First up was the amazing bioblitz at Foxburrow Farm. This is where an area of land is surveyed over a 24 hour period to find every living thing that exists, whether it be plant, tree, fungi, ant, deer, whatever. If it’s living and easily identifiable, then it’s recorded and the best thing about a bioblitz is that anyone can take part, you don’t have to be an expert as there are plenty of experts on hand to help those involved ID their finds.

It started in the evening at 6pm with some twilight pond dipping and a bat walk. I was in charge of the bat walk, my first ever bat walk and it seemed to go pretty well, except there weren’t many bats about. This isn’t to say there aren’t many bats at Foxburrow, as I know there are, it’s just that the bioblitz occurred at an unusual time in the bat world, a time of transition. Yes, most of the juveniles that for the last 4-6 weeks have been happily tucked up in their maternity roosts with their mothers feeding them, had now reached the point where they didn’t need feeding anymore and they had fledged the roost in search of fun and freedom. This coupled with a period of hot weather which in turn caused a boom in insect populations meant that the mothers who had been out all night long continually foraging in the need to feed their young didn’t need to eat so much now. With all the insects about as well, it meant that a lot of the bats were literally just coming out of their roosts, feeding up and then going back to the roost within an hour. The usual feeding routes were no more as there were insects everywhere, not just in particular places and this showed on the bat walk. Walking out from the farm, we came across a couple of pipistrelles (Soprano and Common) and we found a few more a bit further on in one of the fields. At one point I did record a distant Serotine bat, but it just barely made an indent on my sonogram, so it wasn’t going to be heard. Eventually we turned around and walked back and didn’t record a single bat until we reached the farm where a single Common pipistrelle was making use of the moth trap and catching any little bugs that were being attracted to it. So within the hour, those bats that we had first recorded had gone.

But everyone seemed happy that they got to hear the calls of bats that we don’t hear normally and that they actually got to see a few bats too whilst they were echolocating.

Even though the bioblitz is about recording life at a site, we felt that it being a nature event, a bit of stargazing would also be a wonderful attraction for those with a love of nature and the Orwell Astronomical Society Ipswich turned up with their scopes in the hope of showing people the wonders of the night sky. Unfortunately through, the weather had other ideas and the clouds rolled in thick and fast to prevent such musings. Yet, OASI secretary Roy came prepared and gave those budding astronomers a powerpoint talk of the night sky instead.

Those clouds that rolled in overnight brought with them a lot of rain and put a complete dampener on the moth trap, to the point that only 3 moths were caught. However, Tony Pritchard, the county moth recorder stilled turned up early doors to record what moths were there despite knowing it was going to be little, thanks Tony, that sort of dedication is much appreciated.

The wet weather of the night was gone by the time the sun rose and a beautiful promising day began to unfold as everyone prepared for the various events such as butterfly walks, dragonfly walks, pond dipping, bee spotting, mammal trapping and so much more. Unfortunately though, the numbers were low and I put this down to the weather peeps on the telly, who had been promising all week that the weather was going to be bad and thus people had made other plans, yet, it was a glorious day all day and those who did turn up loved every minute of it, finding out about new things and learning so much about the nature that surrounds them. At one point, me and Adrian Knowles, the county hymenoptera (bees, wasps, ants) recorder, found a solitary mining bee that was so small, it was actually depositing eggs into old nail holes by walking backwards into the hole as far as possible to lay an egg. It would appear a couple of minutes later to go find some material to cap of the egg and create a cell for the larvae to develop in before laying another egg in the same hole. It turned out that this bee (Heriades truncorum) is a Red Data Book 2 species. I then spotted what I thought was an ichneumon wasp (a parasitic wasp), laying eggs into the same chamber as the bee with its very long ovipositor. 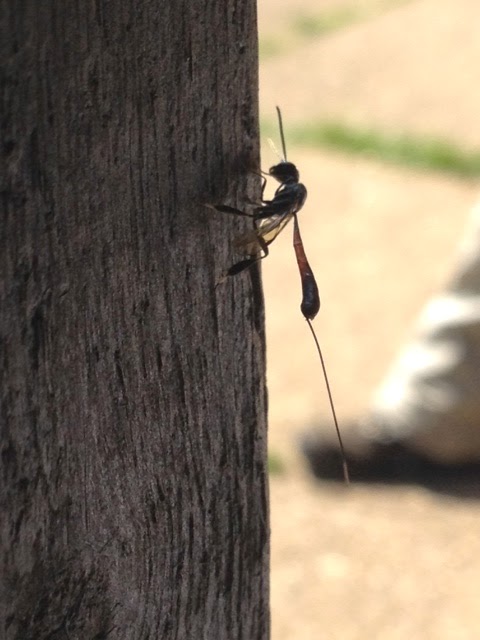 This just goes to show what is actually out there when we start looking. Recently at an event in Christchurch Park in Ipswich, Suffolk Wildlife Trust was dong an event with the Ipswich park rangers. We, as per usual were there to inform and educate people about wildlife and this included running a bug hunting session for the kids where we send them off with a net and bug pot to see what they can find. It wasn’t long before one girl by the name of Helen Jarrett approached me with a bug in a pot. On examining the pot, I soon realised she had found something pretty significant. She had found a seed bug of the Ryhparochromus sp, a recent invader to UK shores and only recorded for the first time in Suffolk last year by yours truly. After a bit of investigation, it turns out the bug was in fact the same species as I found last year (Ryhparochromus vulgaris).

So there you go, Helen, who’s a Brownie and doing her Nature badge is the second person to find this bug in Suffolk, well done! Another record goes to an avid photographer who spotted a butterfly at my new place of work, Lackford Lakes. He came into the centre to ask me what species of butterfly he’d just taken a picture of? It was a Grayling butterfly, which I checked in the book to confirm. Turns out, it was the first record of grayling at Lackford Lakes and it got the staff and volunteers running out to see if they could see it too, which they did, so it was well and truly confirmed. Just goes to show, unless we look, we never know what we might find.

That's all for now, more packing to do. Will catch up soon.